In Syria, Being On Facebook Could Get You Killed 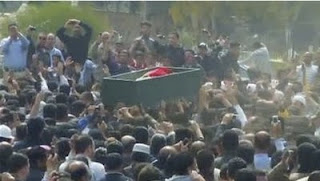 The cyber aspects of the ongoing Syrian revolution against President Bashar al-Asad took an ominous turn in the last week.  On May 9th, British paper The Telegraph reported that captured Syrian activists were tortured for their Facebook and Twitter user names and passwords.  The activist’s accounts were then exploited to identify supporters who were rounded up in the government crackdown.  As a result, activists reported that communications with several areas, including Baniyas and Homs, were almost cut off.  Syria’s ally Iran was also providing equipment to jam satellite phones denying activists another potential communications channel.

On May 10th, Syrian satellite TV carried a 15 minute show accusing Facebook of being a tool of the United States and Israel.  The show claimed that the US and Israel failed to destabilize Syria during the Bush administration using false charges that Syria assassinated Lebanese Prime Minister Rafiq al-Hariri.  The same forces were turning to Facebook—owned by an "American Jew"—to implement their schemes such as starting fake web pages like Days of Syrian Anger and Syria Revolution.  Then, according to the program, conspirators use mass media to call attention to the pages which disseminate false news and videos claiming that the Syrian security forces are attacking demonstrators and that some were killed.  Thousands of fake links to the web pages create the false impression of widespread popular support.  The show implied that the Syrian Revolution 2011 creator Fida al-Sayyid was funded by the US government.

As proof, yet another government-sponsored television program played alleged Paltalk intercepts from al-Sayyid that described the situation as approaching creative chaos.  The show’s commentary then pointed out that the "creative chaos" doctrine originated with former US Secretary of State Condolezza Rice as justification for unleashing Middle Eastern wars.  The show concluded with a tape message from a Syrian living overseas stating he has documentary evidence that Israel's Mossad is behind the Facebook web pages.

The Syrian government propaganda against Facebook is not surprising given the role social media is playing in the so-called Arab Spring.  However, the pro-revolution Facebook group The Syrian Revolution Against Bashar al-Asad warned on May 6th that calls for demonstrations posted by the Aleppo Revolution Facebook page were being used to lure demonstrators into government ambushes.  On May 16th, The Telegraph published reports from National Organisation for Human Rights in Syria stating that they had found mass graves outside the Syrian town of Dera'a where protests began over two months ago.  The Telegraph included video captures from film posted on YouTube.  The route to a shallow grave outside Dera’a may have begun with a friend’s listing on Facebook.