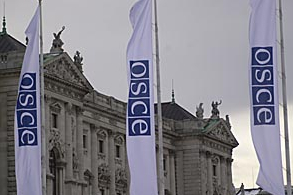 Anonymous has been able to exfiltrate a second, smaller batch of documents from OSCE's webserver (OSCEPA.AT) on November 11, 2012; even after the company knew that they had been attacked. This second batch of documents contains up-to-date information on the OSCE's Internal Working Group 1039 whose mandate (.pdf) is to create cyber security Confidence-Building Measures (CBMs) that would reduce the risk of cyber conflicts. The chairman of the IWG 1039 is U.S. Ambassador Ian Kelly.

The latest revised draft set of CBMs was circulated in a document marked RESTRICTED among IWG 1039 members on November 7, 2012 in preparation for their meeting today, November 13, 2012 in Dublin. They are as follows:

This set of draft CBMs are for discussion by the members. One of the documents included in the latest batch (Comments_AZE_IWB_1039.doc) offers comments from the delegation of Azerbaijan and Lithuania who both want to considerably beef up the language with a few intriguing suggestions:

General comment: Proposed list of CBMs, in general is not result-oriented and does not identify any imperative actions. All proposed CBMs are based on voluntary actions and most of them are already carried out by pS through other various international and regional organizations. We need some more concrete actions that define the responsibilities of the Participating States for the incidents stemming from the use of ICTs.

The concept of a nation state being held responsible for attacks emanating from servers within its borders has come up for discussion within U.S. DoD too. It would certainly make attribution a lot easier if we could simply point to the geolocation of an IP address and say case closed. Unfortunately, that's a completely unrealistic scenario since Internet Service Providers aren't regulated entities and because web servers are easy to compromise (i.e., OSCEPA.AT).

Most of the suggested CBMs are voluntary and fairly ineffective even if put into practice. That's probably due to the fact that the membership of this committee is heavily loaded with policy makers and lawyers and has very few technologists or security engineers. The attack that was levied against the OSCE by Anonymous was apparently of the same variety that its members prefer - looking for easy pickings against poorly-protected web servers. The first confidence building measure that these OSCE national experts should draft is to invoke an Assumption of Breach security framework. In other words, expect to be breached and keep your sensitive documents in a separate, controlled and monitored environment ; i.e., not on a web server.
Email Post
Labels: Anonymous CBMs cyber security ICT IWG 1039 OSCE security