The Cyber Warfare Component to Israel's Pillar of Cloud Op 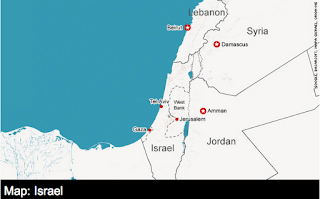 Israeli Defense Forces have been engaged in missile attacks against Hamas targets in Gaza off and on for about a month, however it has escalated in the wake of the killing of Ahmed Jabari, Hamas’ military chief of staff on November 14, 2012. Hamas has announced at least 8 deaths since Israel launched Operation Pillar of Cloud (aka Pillar of Defense), which has primarily involved missile attacks from both sides and the campaign is intensifying.

Operation Pillar of Cloud is reminiscent of Operation Cast Lead which occurred during December '08 - January, '09, however Cast Lead had a widely publicized cyber component in which tens of thousands of attacks were launched by Israeli and Arab hackers against government websites and communications infrastructure on both sides. To date, no such action has been publicized short of an Information Operation being conducted on Twitter between the IDF and the al-Qassam Brigades.

However, back in October when the missile attacks first began, the IDF announced that it was stepping up its recruiting efforts for computer-savvy soldiers. This announcement came the day before the IDF was to hold an awards ceremony honoring 12 soldiers "engaged in the army's cyber-defense activities".  I checked on the likelihood that offensive cyber operations by the IDF would be included in Operation Pillar of Cloud with retired Mossad officer, Michael Ross, who told me that it's safe to say that "every IDF operation includes cyber network attacks of a greater or lesser scale."

Finally, there's this announcement which appeared today on Twitter: 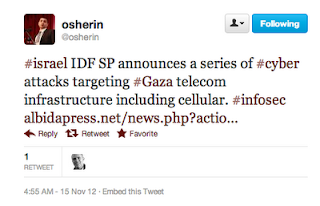 While it's too early to know for sure the scale of cyber warfare running concurrently with this operation, one thing is certain. The Middle East is proving to be the best practical "lab" there is for studying what does and doesn't constitute acts of cyber warfare.

UPDATE 15NOV12 1728PST: Anonymous aligns itself with Gaza and against the IDF:


[W]hen the government of Israel publicly threatened to sever all Internet and other telecommunications into and out of Gaza they crossed a line in the sand. As the former dictator of Egypt Mubarack learned the hard way - we are ANONYMOUS and NO ONE shuts down the Internet on our watch. To the IDF and government of Israel we issue you this warning only once. Do NOT shut down the Internet into the "Occupied Territories", and cease and desist from your terror upon the innocent people of Palestine or you will know the full and unbridled wrath of Anonymous.

UPDATE 15NOV12 1110PST: Evan Kohlmann (@IntelTweet) posted via Twitter today: "Hackers in Gaza have leaked 35,000 credit card numbers of "Zionist civilians" as a "response from the lions to the aggression of the Jews."