Just How Vulnerable To Attack Are U.S. Drone Operations? 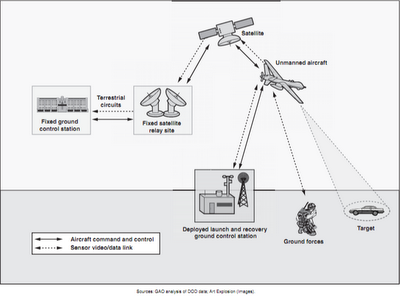 The alleged downing of an RQ-170 by Iran has raised a lot of public attention to existing problems in how the Air Force is managing its Unmanned Aerial Systems. As I reported earlier, an unknown person with FOUO access uploaded an Air Force report to the Public Intelligence website that detailed some of those vulnerabilities one day after Iran announced its capture.  On Saturday another FOUO document appeared on PublicIntelligence.net regarding Afghan drone operations by the US Marine Corps. The Government Accountability Office (GAO) has produced quite a few reports that delineate numerous problems with Unmanned Aerial Systems over the past few years. Some as far back as 2008. Some of the problems identified back then have yet to be fixed, such as the lack of a redundant satellite relay site (GAO report 10-331).

The above graphic illustrates the command and control framework that's in place for Predator, Reaper and Global Hawk UAS missions that support contingency operations in Iraq and Afghanistan. A ground control station in the U.S. takes control of the aircraft. A satellite relay site at a fixed location outside of CONUS relays signals from the ground control station to the UAS. Any disruptions at the satellite relay site would impair the operation of the aircraft. While the Air Force has told that GAO that they're working on implementing a redundant system to solve this problem, as of March, 2010 they "had not conducted a detailed analysis of these options to determine the extent to which they would provide for the continuity of UAS operations, or established a specific milestone to formalize a plan that could be implemented quickly in the event of a disruption." Furthermore, the Air Force didn't anticipate bringing a redundant Satellite system online until fiscal year 2012 at the earliest.

Two other detailed examinations of vulnerabilities present in the Air Force's UAS operations are in the following GAO reports (FOUO):
Cyber Attacks Against Unmanned Aerial System Producers and Developers 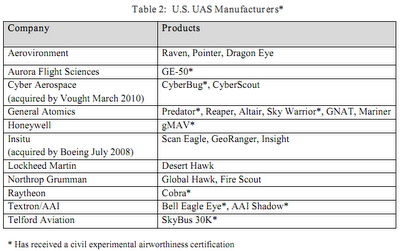 The above table of U.S. UAS Producers and Developers comes from the Department of Commerce' Flight Plan 2011 (.pdf). Of the 11 companies listed, the following have acknowledged that they have been the victim of cyber attacks: Boeing, Lockheed Martin, Northrup Grumman, and Raytheon. Most likely all 11 of these companies as members of the Defense Industrial Base would fall into that category, but the above four have gone publicly on record that they are constantly defending against malicious network attacks. However this reflects only a tiny portion of the attack surface for an adversary who's looking to acquire intelligence on operations or R&D. Globalization has extended an adversary's ability to compromise UAS company networks by attacking affiliates or sub-contractors. For example, Japan's UAV association membership includes Mistsubishi Heavy and Kawasaki Heavy, both of whom were hit with simultaneous cyber attacks last summer and both of whom regularly engage with U.S. defense contractors on various projects such as Boeing.
Europe has 153 UAS producers and developers, some of whom are giant companies like EADS and BAE. BAE was implicated in the massive theft of data from the F-35 Joint Strike Fighter program in 2009 when it was believed that access to the data was gained by breaching BAE's network. It's impossible to know how many of those 153 companies have suffered attacks against their network but considering the value of this technology and the rapidly growing demand for drone aircraft world-wide, it would be naive to believe that any of their networks could withstand a targeted attack.
The most important outcome from Iran's capture of the RQ-170 should be an indepth vulnerability assessment of both U.S. intellectual property and operational vulnerabilities of our Unmanned Aerial System aircraft. This must include an international analysis of partnering companies like Boeing - Mitsubishi, Lockheed Martin-BAE, Insitu-ADASI, and many others. The worst outcome is blind denial that Iran or other U.S. adversaries is capable of compromising U.S. drone operations.
Email Post
Labels: BAE boeing cyber espionage Iran Kawaskai Lockheed Martin Mitsubishi Northrop Grumman Raytheon rq-170 sentinel drone