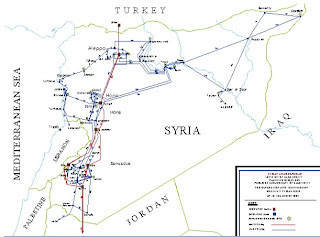 What we know: Someone in Syria used Sarin gas and killed an estimated 100,000 people.

What we don't know: Who did it. So far, no evidence has been collected which identifies the culprit. Was it by order of the Assad government, a rogue action by the Syrian military, or something that the rebels did to force engagement by the West against Assad? Currently, it's a judgment call.

What should we do: So far, the only public options that I've heard involve Tomahawk cruise missiles.
One alternative option that should be (and perhaps is being) considered by Western governments is to send a non-lethal message by breaching and taking control of Syria's national power grid and/or its telecommunications infrastructure. This is certainly within the capabilities of Israel and the U.S., and most likely available to other EU allies, not to mention Russia and China.

It's a relatively small grid with only about 14 power generating stations that distribute electricity received from PEDEE (Public Establishment for Distribution and Exploitation of Electrical Energy) including:

Each of these companies utilizes foreign vendors (another access point) such as the Greek company Metka which services Deir Ali and the Indian company Bharat Heavy Electricals Limited which services Teshreen.

I'll stop there because the goal of this post isn't to create an order of battle, however I do think that putting the Syrian government into a virtual vise where outside nations can control its critical infrastructure should at least be considered alongside Obama's inclination to use cruise missiles. Talk about "deter and degrade" - how much can Assad or anyone else in Syria do without power?
Email Post
Labels: Al Zara Cyber Warfare cyberwar Deir Ali Jandar national power grid sarin gas Syria Teshreen