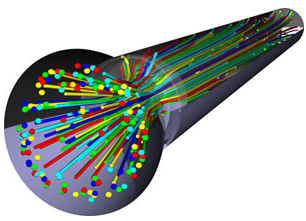 Huawei Symantec, a joint venture between China's national champion firm Huawei Technologies and U.S. security giant Symantec, has secured its first high performance storage cluster win - the University of Tennessee's National Center for Computational Engineering. Huawei Symantec is 51% owned by Huawei and they defeated U.S. firms NetApp, EMC, and BlueArc among others for the UT sale. Well, not exactly Huawei Symantec directly. It was their channel partner MPAK Technology out of San Diego who made the sale. This has been Huawei's strategy ever since it became clear that the U.S. government wasn't going to cave in on its security concerns as easily as the U.K. government did. Rather than trying to sell direct, it has established partnerships with U.S. companies like MPAK and Force 10 Networks to do it for them. What will their equipment be used for? This is from UT's website:


The SimCenter: National Center for Computational Engineering is a center for integrated research and education whose primary goals are to establish next-generation technologies in computational modeling, simulation and design, to educate a new breed of interdisciplinary computational engineer who can solve a broad range of real-world engineering problems, and to provide consequent leadership and national impact in critical technology areas affecting defense, sustainable energy, environment, and health.

Huawei priced themselves far below their competition and the University went with the lowest bidder. Did national security concerns factor in to the decision? I've sent the university an email with that very question. If they respond, I'll post it here. My guess is that security wasn't a factor at all.