DST Global, Social Media, and Favors For The Kremlin

My company has been advising government and corporate interests about Russian investment in social media in general and DST Global in particular since 2009. I've had the unique "privilege" of having an article about the CEO of DST Global pulled from Forbes.com with nothing more than a phone call from Mr. Milner to Forbes followed by a threatening letter from his attorney. Now I see that DST Global II has finally succeeded in convincing Twitter to take its money - $400 million for a 5% stake in the company.

Two Predictions
If Milner's pattern with past investments holds true, two things will happen in the months following this Twitter investment:
These predictions are based upon the following historical record: 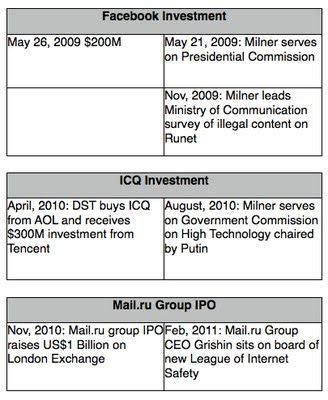 These tables were created for a paper that I wrote entitled "The Geopolitical Strategy Of Russian Investment In Facebook And Other Social Networks" for the Georgetown Journal of International Affairs. The issue is entitled International Engagement On Cyber: Establishing International Norms & Improved Cyber Security, and will be available by August, 2011.
*The above photo was taken for Kommersant on 30.03.2011 in Russia, Chelyabinsk region, Magnitogorsk. Russian presidential aide Arkady Dvorkovich (left) and CEO of the Digital Sky Technologies (DST) Yuri Milner (right) during a meeting of the Commission under the President of Russia on modernization and technological development of economy of Russia.
Email Post
Labels: Dmitry Medvedev DST-Global Russia Twitter Yuri Milner