Suits and Spooks NYC Targeted By Anonymous For A Protest Operation 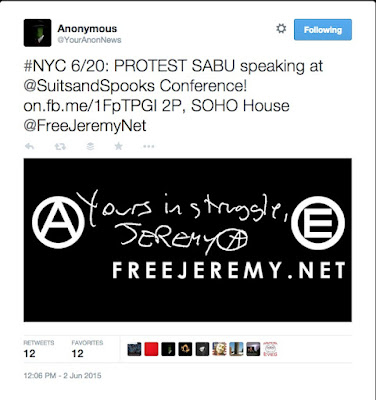 Yesterday I announced that Hector Monsegur (aka Sabu), the founder of LulzSec and a long time member of Anonymous who was responsible for hundreds of attacks, will be a speaker at Suits and Spooks NYC (June 19-20, 2015).

Today, Anonymous (@YourAnonNews) whose Twitter account has 1.4 million followers has announced a #NYC PROTEST SABU operation to take place at Soho House, our venue for the event, on June 20th at 2pm. This marks an unusual first for Suits and Spooks however I've always chosen to provide a platform for speakers with interesting skill sets that aren't typically invited to security conferences. I've found that it's always better sort out disagreements in person in a safe environment than simply engage in online trolling.

So if you'd like to hear what Sabu has to say about his time with Anonymous and what actually happened when he was arrested and began working for the FBI, register and attend. You'll not only get to speak with Sabu but you'll also enjoy hearing some of the best security minds on the planet.