Guess Who Owns The Patent to RSA's Backdoor Algorithm? Blackberry

Meet Certicom, a subsidiary of Blackberry Ltd, who provides the core technology for the National Security Agency (NSA) Suite B standard for secure government communications. Certicom holds 350 patents, many of which cover key aspects of Elliptic Curve Cryptography (ECC) including this one: 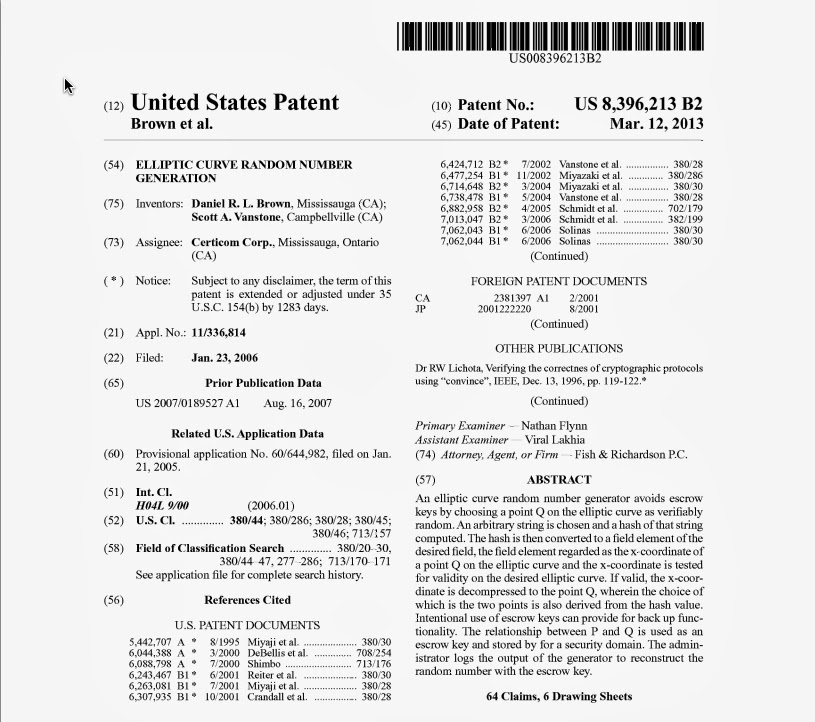 An elliptic curve random number generator avoids escrow keys by choosing a point Q on the elliptic curve as verifiably random. An arbitrary string is chosen and a hash of that string computed. The hash is then converted to a field element of the desired field, the field element regarded as the x-coordinate of a point Q on the elliptic curve and the x-coordinate is tested for validity on the desired elliptic curve. If valid, the x-coordinate is decompressed to the point Q, wherein the choice of which is the two points is also derived from the hash value. Intentional use of escrow keys can provide for back up functionality. The relationship between P and Q is used as an escrow key and stored by for a security domain. The administrator logs the output of the generator to reconstruct the random number with the escrow key.

Certicom was acquired by Research In Motion (now known as Blackberry Ltd) in March 2009 but it has been in business since 1985. The patent authors are two Certicom employees Daniel Brown and Scott A. Vanstone who are also members of the ANSI X9.82 standardization committee. Matthew Green, a cryptography professor at Johns Hopkins, wrote a blog post describing Dual EC DRBG's history with Brown and Vanstone, ANSI and the NSA on December 28, 2013.


The existence of this patent does not mean that Brown and Vanstone were responsible for Dual EC. In fact, the generator appears to be an NSA invention, and may date back to the early 2000s. What this patent demonstrates is that some members of the ANSI committee, of which RSA was also a member, had reason to at least suspect that Dual EC could be used to create a wiretapping backdoor. (Update: John Kelsey confirms this.)

To date, Blackberry has not made a public announcement about its use of Dual EC DRBG but here are the Blackberry products that use it according to NIST:

I've only found a few who have made public announcements advising their customers about Dual EC use: Cisco and SafeLogic. The OpenSSL Foundation has had many discussions about Dual EC in their own forum. Please leave a comment if you know of other advisories by the remaining companies which I've missed.