Operation Warrior Support (OWS) claims to be a third party fundraiser for military 501(c)3 charities but is not itself authorized to collect any funds on behalf of charities by the California Attorney General's office. If this organization approaches you for donations or hire, you should immediately contact the California Attorney General's office and file a complaint against them as an unregistered fundraising professional.

It's difficult enough for most military charities to raise money, let alone have to worry about suffering from attacks on social media from the very same people who claim to be trying to help them. That's exactly what @opwarriorteam (OWS's Twitter account) has been doing to multiple Naval Special Warfare charities. I've spoken to several of them who have been on the receiving end of online nastiness and other ethically questionable acts (including raiding one charity's donor list) and while all are angry, most just want this group to go away and leave them be. I'm going to honor their wishes and not lay out the many spiteful acts conducted by this fake fundraising operation and stick to the core problem; i.e., they're operating illegally.

It is not enough in CA to simply register as a nonprofit corporation, which Lori Douhan (the group's founder) did. All charitable trustees and fundraising professionals who do business in California are required to register with the Registry of Charitable Trusts at the Attorney General's office and file annual financial disclosure reports. You can check on Operation Warrior Support's status for yourself at this website. Once you plug in their name and hit [Search], here's the result: 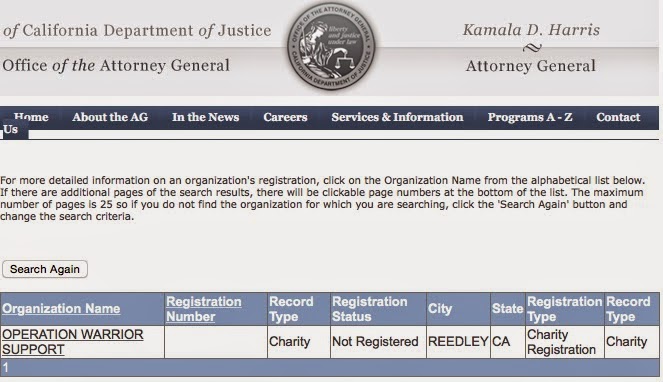 Figure 1: Search results for Operation Warrior Support as a fundraising professional in CA.

Notice in Figure 1 where it says "Registration Status". The returned response is "Not Registered".

Anyone can register a corporation in CA and receive an FEIN number, which is what Operation Warrior Support presents on their website. That's irrelevant for this purpose and unfortunately that has fooled legitimate 501(c)3 charities who have contracted with them in the past. The registration number which a California charity or professional fundraiser is required to have is a CR or Charity Registration number.

Here is what California law requires of a professional fundraiser:

"A commercial fundraiser must file a notice with the Attorney General’s Registry of Charitable Trusts no less than 10 working days prior to commencing each solicitation campaign, event or service. (Notices of solicitations for victims of emergency hardship or disasters must be filed no later than the commencement of solicitation.) The notice must include certain information which is set forth in Government Code section 12599, subdivision (h)." - CA Attorney General's Guide for Charities, p.27

Whatever money OWS has raised to date for charities in addition to the money that they have kept for themselves wasn't in compliance with California law and most likely not in compliance with other State laws regarding professional fundraising; for example - the Commonwealth of Virginia where LZ Grace Warriors Retreat is based (a military charity that OWS raised money for). Virginia has similar registration requirements as California. Guess whether or not OWS is registered in Virginia? If you guessed no, you're right.

Figure 2: Search results for Operation Warrior Support as a fundraising professional in VA.

States have these regulations because so much fraud happens with military fundraising by third parties who rip off both the public and the charities that they claim to help. Lori Douhan and her associates at OWS need to either comply with the law or get out of the fundraising business.

If your military charity is approached by this group, I can only recommend that you do your due diligence first before signing any contracts. If you are one of the charities that they have harmed through malicious acts either online or offline, I recommend that you report them to the California Attorney General's Office or the AG's office in the State in which you reside.


Just so we are clear...a Commercial Fundraiser is an organization that gets PAID to fund raise for a charitable organization. It's run like a business where an organization is contracted to fund raise on behalf of a 501c3 organization. We do not operate as such.
Since we do not charge a fee for our fundraising efforts, nor do we take a salary...nor do we "Hire" our services out...nor did we require a written contract from the organizations we fundraised for, we are not required to be registered as one. For more information: http://oag.ca.gov/charities/cfr.

It's been a long time since I've seen this level of self-delusion:
1. OWS calls itself a third-party fundraiser.
2. They ask donors to a charity to pay them money.
3. They use some of that money in unspecified ways.
4. They give the rest to the charity.
5. They believe that the State of CA won't see that as requiring registration.

I don't have the time to play footsie with this group so I'll let the California Attorney General decide if Operation Warrior Support needs to register with the Registry of Charitable Trusts by filing a complaint. I encourage those readers who are as offended by their activities as I am to do the same.
Email Post
Labels: @opwarriorteam military charities naval special warfare operation warrior support scam