In light of the current tensions between German Chancellor Merkel and President Obama over alleged NSA spying, I found this Der Speigel article in the bookmarks that I keep on nation state espionage: 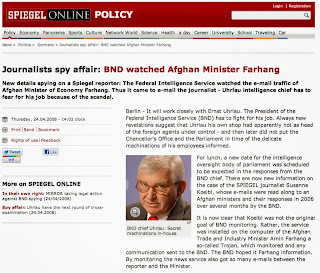 The BND, Germany's foreign intelligence service, was caught spying on Minister Amin Farhang of the Afghan government via a trojan that they installed on his computer. The campaign lasted for about six months and included collecting the emails of a Der Speigel journalist.

Then in 2009 there was this Der Speigel headline: "BND Infiltrated Thousands of Computers Abroad" - which describes how Germany's foreign intelligence service used keyloggers and other tactics to monitor at least 2500 computers in a highly targeted espionage campaign.

Granted, this is nowhere close to the scale of the NSA revelations, however Chancellor Merkel should certainly be aware that her own intelligence services have engaged in the same activities as everyone else's and her outrage should be tempered accordingly.
Email Post
Labels: BND Germany Merkel nsa Obama spying