Forbes, Nike, and the Endorsement of Child Rape 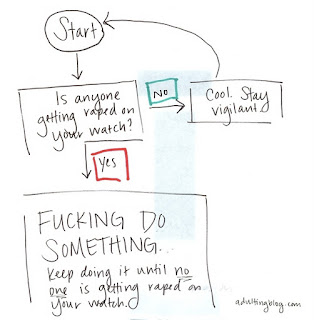 The Forbes.com editorial by executive editor and sports hag Mike Ozanian - "Nike's Refusal To Abandon Tarnished Clients Like Joe Paterno Has Paid Off" - is so off-putting, so peculiarly pecuniary in nature;  so un-sympathetic to Sandusky's child victims that I'd like to start heaving footballs at Ozanian's groin to get him to feel something akin to what those kids felt.

Writing an editorial that coldly makes the business case for Nike to stick with "tarnished" sponsors like Tiger Woods or Kobe Bryant is one thing. Woods was a serial cheater and Bryant was accused of rape, but Joe Paterno along with Penn State University and the University Police are apparently complicit in at least 8 cases of child rape by Jerry Sandusky according to the Grand Jury report. In fact, if you read the report you'll learn that that Sandusky had been victimizing young boys for about 10 years and that the University, Paterno, and the University Police all ignored numerous reports by adult witnesses and family members. Ozanian writes about this like its just another example of a moral lapse in judgment and celebrates Nike for standing by Joe Paterno because it's good for business. When children have been tortured, raped, or killed, you don't coldly analyze it in terms of whether you can still make a buck off the perpetrator, or anyone who supported him. You denounce it. You make the people responsible pay for their crimes. You use your position of power to show other children that this was a heinous act that will never be tolerated. I already knew that the editorial staff of Forbes.com has no balls. Ozanian's post showed me that they have no heart either.

As far as Nike not immediately pulling its endorsement goes - banks figuratively fuck over their customers. You sponsor a guy who allowed it to happen for real. Children are your customers too. Fuck you, Nike.
Email Post
Labels: Forbes Jerry Sandusky Joe Paterno Nike Penn State