Much has been made of the fact that Ren Zhengfei, Huawei's founder and CEO used to work as an engineer in the Peoples Liberation Army before he founded Huawei in 1988. However, lots of CEOs around the world are military veterans including me. What's much more significant is the little-known fact that Huawei's Chairwoman Sun Yafang used to work for China's equivalent of the CIA; known as the Ministry of State Security (MSS). The MSS was formed in 1983, about 4 years before Ren founded Huawei (1987). According to the U.S. China Business Council:


MSS conducts covert intelligence gathering operations overseas. It has established intelligence agencies in more than 170 cities and in nearly 50 countries and regions all over the world. These agencies are classified as general branches, branches, and sub-branches. MSS aggressively targets the United States, placing particular emphasis on California's high-tech sector. Cover for Beijing's espionage in the United States includes the 1,500 Chinese diplomats operating out of 70 offices, 15,000 Chinese students who arrive in the United States each year, and 10,000 Chinese who travel in some 2,700 visiting delegations each year.

The Federation of American Scientists (FAS) has a much more detailed description of its history and operations here.

Madame Sun's past with the MSS was first disclosed by a Financial Times article last April. Her Huawei biography neglects to mention that key affiliation, however it is commonly reported in many places on the Chinese Internet. One place in particular is the alumni page for her alma mater; at least it did until just recently when it was mysteriously corrected. Here is a table showing the original time line which included her tenure at MSS and the new "corrected" timeline. 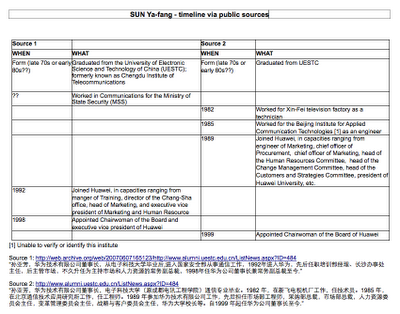 The redaction occurred shortly after I posted two back-to-back articles about Huawei's questionable employee stock loans. Apart from the alumni website, similar information about Madame Sun's time at the MSS also appears in Baidu's version of Wikipedia. Considering how difficult a time Huawei is having convincing the U.S. government that it's just another technology company, I would think that the company would respond by releasing a verifiable resume of their Chairwoman which would end this controversy once and for all; similar to what President Obama did to resolve questions about his birth certificate.