The McIrvin family, owners of the Diamond M cattle ranch for five generations,  have been running cattle in Colville National Forest, one million acres of federal land in Ferry, Stevens and Pend Oreille counties. There's no good reason for it because the land is ill-suited for cattle and it's home to about 100 wolves; an endangered species in WA state. 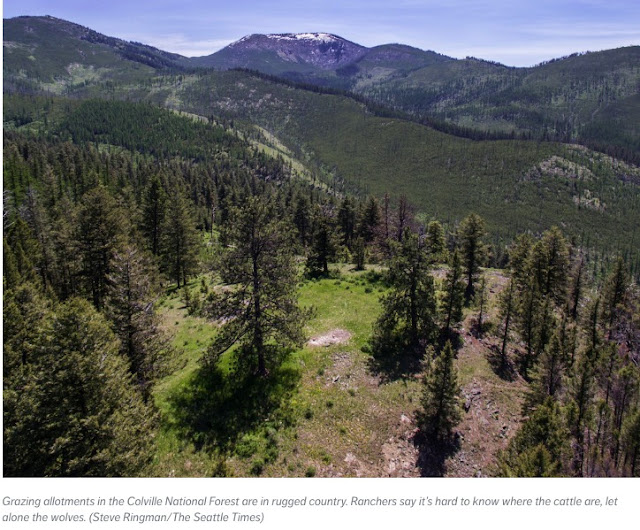 I'll say that again so that it sinks in.

16% of the total population of an endangered species in WA state have been killed because one rancher lost .003% of his herd grazing on land that he doesn't own.

The worst part of this madness is that every other rancher in Eastern WA takes the compensation offered by the State for cattle depredation, which equals twice the value of the dead cows.

But Len McIrvin doesn't want the State's money. He wants dead wolves. His grandson and partner, Justin Hedrick, who's also president of the Steven's County Cattlemen's Association (SCCA), also wants a return to leg-hold traps (currently illegal) according to the Seattle Times.


“It’s such a crooked, damn deal they’re throwing at us,” (Len McIrvin) said. “Wolves and cattle are like oil and water. They do not mix, and they never will.”

WA State has killed 19 wolves since 2012, all because Len McIrvin, owner of the richest cattle ranch in the State, thinks getting paid twice the value of a dead cow is a "crooked damn deal" and that, basically, the only good wolf is a dead wolf.

It's not just wolves that the McIrvins and Hedrick want gone. They're also opposed to environmental protections for wildlife according to this letter that Hedrick wrote in his capacity as President of the Cattlemen's Association to the US Forest Service and US Dept of Agriculture about their proposed CNF management plan revisions:


"(T)he proposed Colville National Forest Plan Revision would impose nonsensical, arbitrary restrictions onto the current allotments, making compliant management impossible. For instance, parts of the plan require that ranchers manage their cattle in order to leave enough grass for snowshoe hair (sic) that may eventually be eaten by lynx. Other areas require that ranchers leave six to eight inches of stubble height near waterways and salt blocks and watering tanks would be prohibited around rare plants.

Additionally, cattle are required to be managed so they do not congregate on trails, destination areas and cultural sites. Grazing cattle must also be kept away from spawning fish."

In short, Hedrick is complaining because he and his fellow ranchers may actually have to manage their cattle while on publicly-owned land in the CNF. Perhaps if the Diamond M ranch managed their cattle as required, they wouldn't be losing them to wolves. But that's probably "nonsensical" thinking, like protecting waterways, spawning fish, and snowshoe hare (not "hair", Justin).

The good news is that the U.S. Forest Service and USDA kept those provisions intact in the final CNF management plan released last month.