Taia Global's Chief Science Advisor Dr. Shlomo Argamon, one of the country's preeminent researchers in authorship analysis and stylometry, led a team that conducted native language identification (NLI) analysis on the 20 messages left by Sony's hackers. Their results do not support the U.S. government's charge that North Korea was responsible for the network attack against Sony Pictures Entertainment. This post is a mini-version of the full report, which can be downloaded from the Taia Global website.

The specific question that we address in this report is to determine the (non-English) native language of the authors of the electronic messages (emails and forum posts) signed by the “Guardians of Peace,” putatively from the group that hacked into Sony Pictures Entertainment, stole their data, and posted some of it publicly.

For our analysis, we used twenty messages reported in the media and posted to Pastebin that have been attributed to the “Guardians of Peace” (GOP) group (see Appendix A in the report).

To do our analysis, we must first rule out two alternate scenarios.

Second, that the messages are the result of automatic translation of foreign-language original texts, in which case it would be difficult, if not impossible, to figure out the original language from the English texts (at least without knowing specifically what translation software had been used). See Appendix D in the report for examples of Google Translate.

We apply a two pronged methodology to analyzing the native language of the messages’ authors.
First, we examine a number of possible candidate languages, including Korean, to see if we can rule them out, and if not, which one does seem the most likely native language.
Second, as a further check, we perform an independent test for the messages’ similarity to English written by native Korean speakers to see how similar the non-fluencies are. 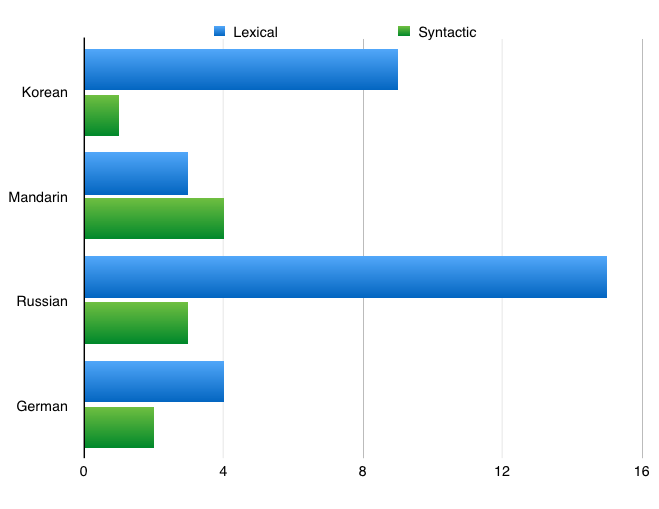 This study is limited by the small number of languages that were studied, as well as by the limited comparison with L2 English samples. We plan an expanded study of the messages, comparing against a wider sample of candidate languages as well as performing statistical comparisons against L2 samples in Korean and other languages.