In the course of writing this month's S&TI Flash Traffic report for our subscribers, I came across this interesting article which demonstrates that the U.S. isn't the only country worried about supply chain security. 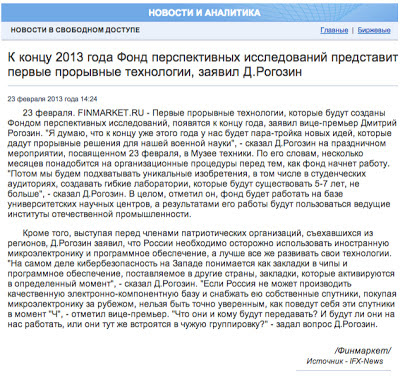 I had one of our Russian-speaking contractors translate it for inclusion into our report. Here's the English version:


February 23rd – Finmarket – The first breakthrough in technologies that will be produced by the fund of advanced research will appear by the end of this year, declared deputy prime-minister Dmitry Rogozin. “I think that by the end of even this year we will have one or two new ideas, which will facilitate a breakthrough decisions for our science of warfare,” said Dmitry Rogozin at the celebratory event hosted on February 23rd in the Technology Museum. In his opinion, before the fund starts their work a few months for organizational procedures will be needed.  "We will then acquire unique innovations, among others student auditoriums and institute flexible testing stations, all of which will exist in 5-7 year, no more,” said Rogozin. Altogether, he mentioned, the fund will be powered by academic science centers, and the results of its work will be used by lead institutes of domestic industry.
In addition, appearing before members of the patriotic organization which gathered from the regions, Rogozin asserted that Russia is obligated to carefully use foreign micro-electronics and software, and better overall to develop their own technology.  “Actually, cyber security in the West is understood as bookmarks in chips and software, supplied to different countries, bookmarks, which activate at a defined moment,” – said Rogozin. “If Russia can’t product a quality electronic-component base and  supply their own satellites, buying microelectronics abroad, it’s impossible to be exactly sure how these satellites will react at hour “X” – mentioned deputy prime minister. “Who are they, and who will they transfer to? And will they work for us, or will they be worked into another group?” – questioned Rogozin.

The Fund of Advanced Research is Russia's newly created version of the U.S. Defense Advanced Research Projects Agency (DARPA). This article demonstrates the Russian government's concern over supply chain security when it comes to their reliance upon foreign-made microchips and software. Ironically, while U.S. companies make these products, we often don't make them in the U.S. but in China; hence we have the same problem that Russia does.
Email Post
Labels: Advanced Research Fund China DARPA Rogozin Russia Supply chain