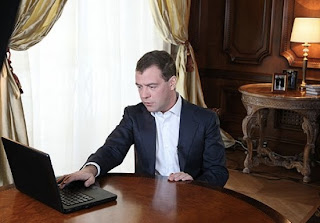 Russian President Medvedev is well aware of the influence that Twitter, Facebook, and other social networking websites have played in the revolutionary changes that have been taking place in the Middle East and the Maghreb. He said as much last week when he spoke at a meeting of Russia's Anti-Terrorism Council in Vladikavkaz according to a Feb 24th article in The Moscow Times "Kremlin Sees Peril In Arab Unrest".

Effective today, March 1, 2011, a new Russian law gives police the right to order executives of Internet companies to shut down services which pose a threat to the peace or place the security of the Russian Federation in peril. This follows earlier high profile government efforts to "clean up" the Russian Internet space (known as Runet):


These internal efforts are preceded by the Kremlin's recognition that the Russia-Georgia war (2008) signaled the beginning of the virtual reality of conflicts and "the need to wage war in the information field too" (Vladislav Surkov in a closed door address to Russian spin doctors as reported in "Information Warfare Chronicles" - Yevropa Press 2009).

Considering that DST-Global either owns or has significant investment in some of the world's largest Internet services companies (Facebook, Zynga, ICQ, Mail.ru, GroupOn, QQ, vKontatke, etc.), Medvedev's strategy may very well achieve its objective of maintaining order through the diversification of control via a citizen's "League", expanded police powers, and the support of corporate officers from billion dollar Russian companies like DST.


UPDATE: (01 Mar 2011 1025 Eastern) Moscow Prosecutor's office seeks to label Live Journal an extremist website. Below are scans of the document from the Live Journal blogger nb_licantrope: 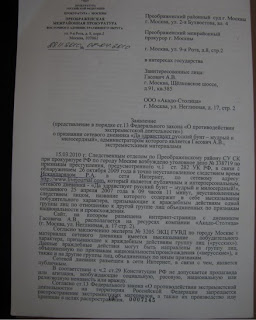 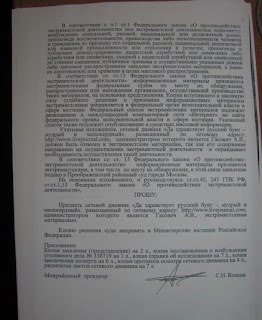